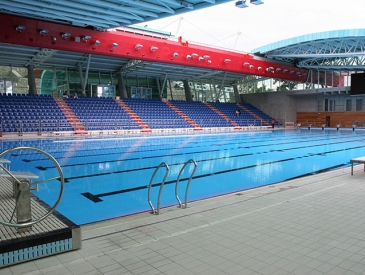 As the Olympic pool 1 (indoor swimming pool) is the largest pool (10 lanes) meeting all standards for hosting major sporting events and competitions, numerous local, national and international championships have been held there. Some of which are the12th European Short Course Swimming Championship (December 2008), Water Polo Final Four (May 2009), 19th Synchro Cup (June 2009). The Olympic pools are a regular destination of various sports clubs, institutions, associations and general public alike.

The particularity of the indoor swimming pool is its retractable roof that provides a startling view of the Kvarner Bay. Its stands can seat 770 spectators, whereas additional 616 seats can be obtained by installing the platform assembly.

Kantrida Swimming Pools have been a host to numerous social events, such as the Athlete of the Year of the city of Rijeka 2008 ceremony, the final show of elementary schools of Rijeka organised by Novi list, closing ceremony of the summer festival Riječke ljetne noći (Rijeka Summer Nights), to name just a few.